“Although I initially thought I would be sent to Vietnam, by the time I graduated Ranger School, American involvement in the war was winding down,” retired Army Lieutenant Colonel Bob Ozbolt said as he reflected back on the beginning of his twenty-two years military career. In the latter half of the 20th century, the Cold War tested the United States, and for many Cold War service members, so veterans like Bob Ozbolt, never faced combat in the ways many of today’s veterans are.

Bob’s family had a long tradition of serving in the United States military, so Bob knew that when the time came, so would he. At the time Bob was entering college at Clemson University, ROTC (Reserve Officers’ Training Corps) was still mandatory for all males. Bob continued in the 4-year advanced program and was commissioned as a 2nd Lieutenant upon graduation in 1971. Following his college graduation, Bob went on to complete Infantry Officer Basic Course, Airborne School, and Ranger School. By the end of 1972, when Bob had finally finished all of his training, to his surprise, he was not deployed to Vietnam; instead he was sent to infantry units in Colorado. After two years in the fleet, Bob was given the opportunity to go to flight school at Fort Rucker, Alabama, where he completed both the Rotary-Wing Aviator course and the Fixed-Wing Multiengine Qualification course.

Bob subsequently spent his military career as a pilot, flying missions across the globe, including in the Middle East and in Germany. Bob explained, “We flew communications intercept missions along the East German and Czech Border, keeping track of Soviet and East German military actions.” So though Bob’s experience in the military never saw combat, he actively took part in the Cold War. 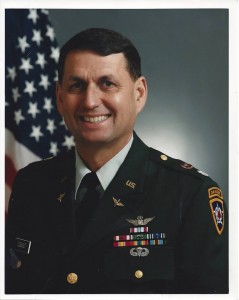 While in college, Bob met Georgann, who eventually became his wife. After they were married, they decided they wanted to start a family. Though being military can be difficult for many families, the Ozbolt’s looked at the military as a blessing to their lives. “I think the military gave my family, particularly my children, (but for Georgann and I as well), an invaluable geo-political perspective. I was glad that my children were old enough to live in, experience, and remember seeing countries that were NOT free (East Germany, East Berlin, and Saudi Arabia, to some extent). This gave them the appreciation for our country. Though not perfect, it is by far the best they have experienced,” Bob explained, reflecting on his family’s military experience.

Bob retired after twenty-two years in the Army, and was fortunate to have been on active flight status and still current as a pilot, with turbojet ratings in the Gulfstream Aircraft when he retired. “I knew I wanted to continue flying Gulfstreams; and I was able to use my military experience and training to get a job as a Gulfstream captain,” Bob said about his initial transition out of the Army. At the time, there was a mini economic recession in the United States, so Bob had to make some concessions in order to find work. Bob was willing to work part-time, which helped him find a job as a pilot, and gave him the opportunity to prove to his employer that he was an asset, and eventually, his hard work paid off. Bob said “I was grateful that the Army had trained me in a skill that I could ultimately use to help me transition to a full time civilian career. I was able to fly for Gulfstream Flight Operations as a demonstration pilot, and as an international captain and training captain for Gulfstream customers around the world.” Though the recession made things a little difficult for Bob to find full-time employment, the transition came at a great time for the Ozbolt family. Bob explained, “My job initially did not require a move, and though I was gone quite a bit, they were used to that, and the children did not have to change schools. Our son had just graduated from high school, and he was headed off to the University of Virginia. Our daughter was able to complete high school without moving.”

Bob’s experience in the military was quite different than the experiences of service men and women today. The nature of the Cold War was completely different than the nature of the conflicts in the Middle East that the United States has been involved in since the early 1990s. Bob acknowledges the differences between his service and the service of today’s veterans, “Since 9-11, people in Armed Forces have faced 2,3,4, and more deployments to war zones. Each deployment takes a terrible toll, mentally and physically. We still have troops very much in harms way.”

Because the veterans who have served in Iraq and Afghanistan are facing daunting challenges in transitioning to civilian life, such as finding a job that pays the bills and can lead to a career, Bob volunteers with Combat Veterans to Careers. He said, “Transitioning out of the military greatly impacts military families. The work veterans, and their spouses, do to keep the families together during multiple deployments, is too often undone. CVC works to help the veterans and their families, with what we like to call 360 degrees of support.”

Bob is a proud Army veteran, and could not be more proud of his service, or the courage and sacrifice our military makes on behalf of our nation’s freedom for all Americans. He recommends serving, and does what he can through volunteering to ensure that when things get hard, the military community is always there for support. Bob says, “You can learn to never quit; to never give up; to keep going just a little more, a little longer, to achieve your goal.” 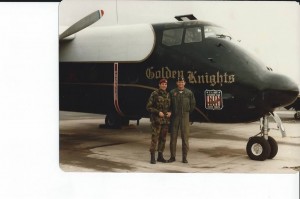