During the American Revolution, General George Washington sought to create an award that would recognize the outstanding merit of his men; something that would boost their morale. He wanted the award to honor the “common soldier”, a variance of the British tradition, that only the high-ranking officers received honors and awards. On August 7th, 1782, The Badge of Military Merit was born.

“The General ever desirous to cherish a virtuous ambition in his soldiers, as well as to foster and encourage every species of Military Merit, directs that, whenever any singularly meritorious action is performed, the author of it shall be permitted to wear on his facings over the left breast, the figure of a heart in purple cloth or silk, edged with narrow lace or binding. Not only instances of unusual gallantry, but also of extraordinary fidelity and essential service in any way shall meet with due reward.”

Historians confirm that the Badge of Military Merit was awarded only three times following its establishment, before it seemed to have been forgotten about. It was not until General Charles Summerall, in the wake of the First World War, proposed to Congress, a revival of the award. Years later in 1931, General Douglas MacArthur proposed the idea yet again. Then, finally, in 1932, on the 200th anniversary of George Washington’s birth, the Department of War announced the reestablishment of the Badge of Military Merit.

Initially, the award was exclusive to the Army, and it was not intended to only honor those who had sustained injuries in combat, but in December of 1942, President Franklin D. Roosevelt ordered that service members of all branches be eligible to receive the medal, and declared that the medal be awarded to those who “are wounded in action against an enemy of the United States, or as a result of an act of such by an enemy, provided such would necessitate treatment by a medical officer.” As a result, the Purple Heart became the military award we know today. 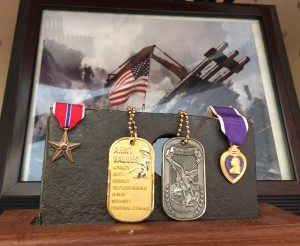 Throughout our nation’s history, many men and women have served our country honorably and have sacrificed on behalf of the freedoms and liberties that we have as Americans. August 7th is Purple Heart Day, dedicated to remembering and honoring the history of the award, and those who have sacrificed and adorn it.