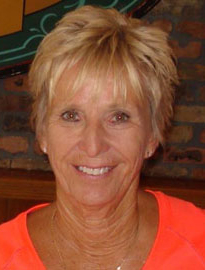 Kathleen went to school at Milwaukee Technical College and received a degree as a veterinary technician. Kathleen worked in a veterinary clinic in Elkhorn, Wisconsin for five years.

When Dennis came back to the states after spending 15 months on a remote assignment, he was assigned to McGuire AFB, NJ. Kathleen went to a dental assistant course offered on base. After completing the course she volunteered in the base dental office for two years.

Dennis decided to end his military career and start a new career as an Air Traffic Controller, and Kathleen went to work at Rockford Memorial Hospital as an Admitting Clerk and later as a Quality Assurance Coordinator.

After many years of cold and snow, the couple decided it was time to change climates and came to the Villages in 2003. Kathleen saw the generosity of Villagers giving back to the community through time, talents and treasures. She went to work for GMS and is presently a starter at Nancy Lopez executive courses; she is also a secretary for the Cares and Shares Committee. In 2012, Kathleen came across Combat Veterans to Careers and knew immediately that was where she belonged to volunteer her time. She has served as a volunteer in the office staffing, also sending out all the thank you letters for donations. She has helped in every event CVC has sponsored. In the past three years she has seen how CVC helps our combat veterans in a 360 degree support role. A lot of help is needed and she is serving to help in any facet needed.