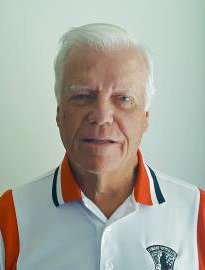 Hugh was born in Chicago in 1938 and grew up in Glenview, IL. He graduated from Glenbrook High School and joined the U.S. Navy in 1955. He served active duty in Annapolis, MD, attached to the Naval Academy Band, and graduated from Southern Illinois University in 1963 with a degree in Accounting, followed by an MBA in 1968.

He joined the Naval Air Reserve as an E5 and was attached to a helicopter squadron as a sonar operator. Through the Navy’s Direct Appointment Program, he received a commission as an Ensign in 1964, then transferred to Patrol Squadron 723 as a Naval Flight Officer with duties as a Navigator and Tactical Coordinator. He retired from the Naval Reserve as a LCDR in 1977.

In 1998, he moved to The Villages and in 2001 began working for Golf Management Solutions. Hugh currently volunteers accounting services for Combat Veterans to Careers and Tri-Country Junior Golf as well. He enjoys playing golf two-to-three times a week.