Lieutenant Commander Holly Shaffner, USCG, ret. had a career and transition out of the military that was quite unique. As a female, Holly was one of the 203,000 women active-duty in the entire United State military. Like so many others, Holly Shaffner was originally attracted to the military for the G.I. Bill benefits. She planned to do her four years and that was all. However, she ended up falling in love with her job and decided to make a career out of it. Holly’s first choice was the Navy, after seeing the movie Top Gun she wanted to be a fighter pilot. Unfortunately she didn’t have the grades for the Naval Academy, so her recruiter offered her a different option: enlisted. Holly began to take the next steps towards enlisting, when she found out that she was excluded from being allowed to do certain jobs in the Navy because she was a woman. For Holly, that was enough to make her start looking at other options; that’s when she called the Coast Guard recruiter. Her first question was “what jobs are available for women?” and to her delight, the recruiter responded: “Ma’am, any job a man can do, a women can do. There are no jobs closed to women. We have men and women out there serving side by side every day doing boardings and busting drug runners.” Two weeks later, Holly was at Bootcamp for the Coast Guard.

Holly had a lot of diverse experiences. From search and rescue, to 9/11, to hurricane Katrina, she had seen it all. She recalls, “It wasn’t always easy being stationed on ships for over eight years, or busting drug runners or migrants in the middle of the night or taking search and rescue calls almost every night. I will never forget helping with the search and rescue case when a CG C-130 and USMC helicopter collided off the coast of California and getting reports that no one survived. I will never forget getting the call from the boss on the morning of 9/11 to, “get to the armory, check out a weapon and go protect the base.” I will never forget the shear devastation of Hurricane Katrina when my men and women worked around the clock for 12 days to save thousands of lives in New Orleans.”

After 24 years of service, Holly was ready to begin her next adventure: life outside of the Coast Guard. She had everything planned for retirement ceremony, began to make her plans for what would come next, but then, something Holly never expected happened. She went in for her retirement physical, as she was having her mammogram, the technician noticed something, and three days later, Holly heard those three words no one ever thought they’d hear: “You have cancer.”

Holly’s life changed instantly. Everything had come to an abrupt stop. Her retirement had to be put on hold, which meant so did her plans for after the Coast Guard. However, Holly’s family, friends, and branch were all supportive of her. Holly worked hard over that next year to get healthy and get back on track with her post-military plans. Now, she is a Breast Cancer survivor, San Diego State student, active volunteer, and proud veteran. Throughout her college career, the military has kept a very special place in Holly’s heart. She volunteers and worked with homeless veterans, wounded warriors, student veterans and she sits on the Board of Directors for the Veterans Museum in San Diego. It is evident that Holly understands the value of support in transitioning out of the military, and has made sure to be an active member of veteran support organizations. 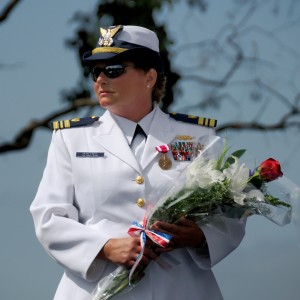 In May of 2015, Holly will be walking across the stage at graduation with a degree in Journalism with an emphasis in Public Relations and a minor in Communication, and begin yet another life transition.