From Sergeant To Student

From Sergeant To Student

Immediately following high school graduation, many students decide to continue their education and attend college. Alex Van Lieshout was an exception, two months after receiving his diploma, Alex left for Parris Island for Marine Corps boot camp. He said, “I always knew I wanted to be a Marine and serve my country.”

In November of 2007, Alex received his Eagle, Globe, and Anchor, and earned the title of United States Marine. Following his boot camp graduation and training, Alex was given his orders to report to 5th Battalion, 10th Marine Regiment, (5/10) Romeo Battery. Within a year, 5/10 began training and work-ups for their upcoming deployment to Afghanistan. Finally, in late March of 2009, the day came, and at 20 years old, Alex was off to war. He spent nine months in the Helmand Province of Afghanistan. “I loved deploying, I felt like I was actually making a difference. I felt that my being there was protecting the American way of life being attacked, and kept the fight off our soil,” Alex explained. 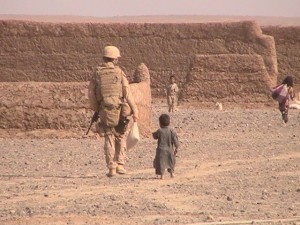 The nine months passed, and as November rolled around, 5/10 made their way home, just in time for Christmas. While coming home was something everyone had looked forward to, Alex explained the impact a deployment has on a unit, “We all just wanted to deploy again. I feel like being on deployment, there’s a comfort in the simplicity of things and you know what your job is. You know what you are there to do and you just can focus on it.” However, that was Alex’s only combat deployment, though he eventually extended his contract for another deployment, this time to Japan.

Four years in the Marine Corps flew by quickly for Alex, he knew he wanted to get out and explore the civilian opportunities, so he made the decision to attend college. Alex was accepted to The Ohio State University for the fall 2012. “It was difficult transitioning from the military to college. There are a lot of things you lose without practice, such as writing skills and math. I felt like I was constantly playing catch-up. Additionally, you don’t have the support system like you did when you were in the military. I felt like I was basically on my own.”

Coming back to college after taking an academic sabbatical, Alex was older than most of his classmates. He described being a non-traditional student: “You always end up taking charge of group projects and classwork. It’s like because you’re older and have more life experience, you naturally fall into the leadership role all the time. Being in the Marine Corps, I had been placed in leadership roles before and was comfortable in that position. I was also able to translate some of those learned skills from the Marine Corps into my new, classroom, environment.”

Alex’s transition to college is not unlike most veterans who make the decision to go back to school and earn a degree. Alex admits that at times it has been a challenging transition, although he says taking advantage of the of the college experiences has helped not only make the most of his collegiate career, but eased the transition. Alex attended football games every Saturday throughout the fall, joined various clubs on campus, and has participated in campus-wide events such as Buckeyethon and the National Championship Celebration. In addition to the campus resources and opportunities, Alex has gotten involved with Combat Veterans to Careers. He said “interning and volunteering with them has helped give me that connection with other service members that I missed.”

During his summer break, Alex traveled to Florida where he first came into contact with Combat Veterans to Careers, who helped him find work, and an income, for the summer. Alex became a team member for All American Pro Exterior Cleaning, a veteran owned and operated business. Alex said, “I really liked helping another veteran through his transition out of the military and into his own business. I felt like we bonded over where we were in life. I really appreciate CVC giving me that opportunity and experience.”

Alex said he can only say this about his experience as a student-Veteran: “I’ve enjoyed the opportunity to receive and education from such an great school, the extracurricular activities, as well as being able to be apart of a student body experience that has not only supported, but embraced, me being a veteran.”

Alex Van Lieshout is on track to graduate in the spring of 2017 with a degree in Welding Engineering, and does not know for sure what his plans are after that, “I’m just enjoying the experience one day at a time.” He’s also added that he plans to stay very close with Combat Veterans to Careers since they have already made such an impact on his transition into college, he can only imagine what they’ll do to help him in his career. 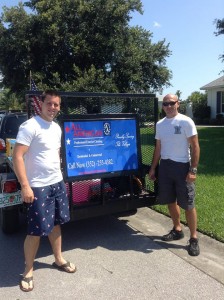