From A Kid’s Perspective

From A Kid’s Perspective

Many young children spend much of their early years adorned in capes and super hero t-shirts, playing pretend, but Kevin Rochon spent his childhood days dreaming of a different kind of hero. For Kevin, heroes wore combat boots and dog tags, because Kevin’s definition of a hero was inspired by his father. Kevin’s dad, Gene, spent most of Kevin’s life, serving in the United States Coast Guard, something Kevin was extremely proud of.

Kevin felt his dad was an inspiration and strove to be like him in anyway he could. He said, “I wanted to be in the Coast Guard like dad because in my eyes, he was a hero. He was able to protect anyone and anything he wanted to. I wanted that power and to be like my dad.”

The military community became a family for Kevin. He came to bond with other military children. His best friends learned to be supportive of each other and understanding. Kevin’s best friend’s father lost his life in combat. It made an impact on Kevin, “I know that people like Mr. John sacrificed their lives for something bigger, which is that America is the greatest country on earth. They knew that without a doubt, so they put their lives on the line for us.”

Growing up as a military child is never an easy task. Before the age of 10, Kevin lived in three different states and four different houses, and he learned how to say goodbye to his dad as he went on various deployments. Kevin shared some of the life lessons he learned, “being a military child taught me about sacrifice and freedom because I learned what the price of freedom was and not to take it for granted.”

To Kevin, the military was more than just his dad’s job, but when Kevin was in middle school, it was time for his dad to retire and change life paths. Kevin looked at the oncoming transition with optimism, “I was fine with him getting out of the military. It was going to give me a chance to get rooted somewhere.” After Gene’s retirement came one last move: to Florida.

Kevin’s mom took a new job, and his dad was looking to start his own business, a transition Kevin knew could be difficult for his dad especially. “I think it was a good transition for him, and Combat Veterans To Careers helped a lot with getting him right to work. I’m really proud of my dad because he’s got a lot of pride and success in doing something that makes him happy.”

Since his dad’s transition out of the military, and to Florida, Kevin often finds himself helping his dad out on various jobs that the business has. He also makes sure to spend time volunteering with Combat Veterans To Careers. Kevin says “I like to volunteer there because it helps people like my dad, that are trying to do the best thing for their family.”

No matter what the challenge Kevin’s dad faces, Kevin believes his dad can do anything. He still dreams of being like his dad, “I want to be in the military myself, because, like my dad, I am willing to make the sacrifice for our country and freedom. It’s something that my dad taught me was worth it, and is something that is bigger than myself.” 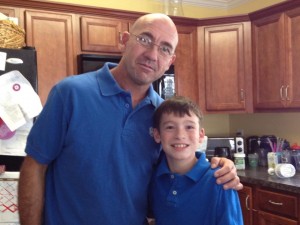