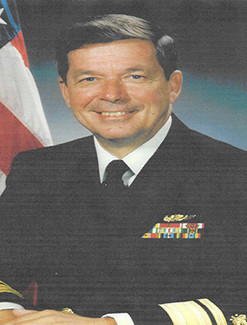 Rear Adm. Hickman’s served in a variety of afloat and ashore tours in the Navy and retired in 1999 after serving for 37 years on active duty . He achieved the rank of Rear Admiral Upper Half and was serving as Commander, Naval Supply Systems Command and 40th Chief of Supply Corps at the time of his retirement.

Since retirement, he has served on several Boards and Committees and worked as an independent consultant. In particular, he served as Chairman of the Board of Directors of the Navy Supply Corps Foundation from 1999 to 2009 where he directed the non-profit Foundation through the development of a long term Strategic Plan and related successful fund drive. In 2011, he was awarded the Navy Supply Corps Lifetime Achievement Award. He recently resigned from the Board of Directors of Vision Technology Halter Marine, a shipyard on the gulf coast of Florida where he served for 10 years. He and his wife Libby, moved to The Villages in 2005.