HomeNews BlogNewsArmy Veteran Takes The Next Steps Up The...

“I recently returned home from the deployment when I got out and had to transition from a wartime soldier to a full-time husband and father. Honestly, it was difficult,” Army veteran, Mason Guyette explained about his initial experience getting out of the Army and starting the next part of his life.

Mason served in the Army for ten years, which included a 15-month long deployment to Iraq between 2006 and 2008 that impacted Mason even after he left the military. Mason, like many veterans, faced residual feelings from his combat deployment that were often hard to cope with, and even harder to express. It can seem lonely and make things difficult for the veteran and can impact their family and personal lives. Mason missed the brotherhood and camaraderie he had built with others when he was in the Army, he described “[that] still dealing with feelings and emotions from the war and not really having anyone to talk to made it difficult to transition back into society as a civilian.”

Though Mason faced obstacles in his transition out of the military, he knew that he needed to start taking the next steps towards a new career, which was when he decided he wanted to become a firefighter. Becoming a firefighter means more than just another job. For the Guyette family, it means a solid income and more time they can spend together, as a family. Further, it gives Mason back that feeling of camaraderie and brotherhood that he had been missing. Mason also sees this career choice as something that he can inspire his children with, “I believe it to be a role model profession for my children to look up to, and possibly strive to become, and even serve their community.”

Mason knew what he wanted to do in this next chapter of his life; however, he wasn’t quite sure what the next steps he needed to take were. Then, Mason learned about Combat Veterans to Careers and met David Booth, who helped give Mason guidance and support so that he could start to work towards achieving his goal and successfully transition out of the military.

The first thing David told Mason, was that it was going to be hard, and Combat Veterans to Careers was going to be in his business. Mason said, “It took a few months to fully understand that, but once I fully understood exactly what CVC needed from me and my family, it has been a great relationship.”

“Becoming a firefighter is another step towards success for me and my family,” Mason explains, “Overall, my transition has been like a roller-coaster. You have your ups and downs but I was taught throughout my military career to never give up and hold your head high. That’s kind of been my life motto, and so far it seems to be working.” 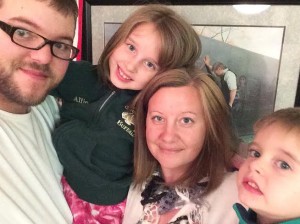 Mason keeps working towards achieving his next goal in life: he’s graduated from the Fire Academy and EMT school, and is ready for the next step in his life. Through his struggles and achievements, he said he always has his family and Combat Veterans to Careers supporting him every step of the way.