Joining the U.S. Air Force right out of high school, Alex Nataline wanted to be a part of something greater than himself, challenging himself physically, mentally and emotionally. He served three years as a Crew Chief, deploying for six months to Al Dhafra Air Base in the United Arab Emirates.

After his deployment, he was quickly transitioned to back to civilian life. Yet even with loving friends and family welcoming him back home to Lady Lake, FL, Alex felt isolated. He had no idea how many local veterans were having the same thoughts and feelings he was, or how many had seen and done the same types of things he had. There was no one to relate to or lead him through the next process of transitioning out of active, combat military life. 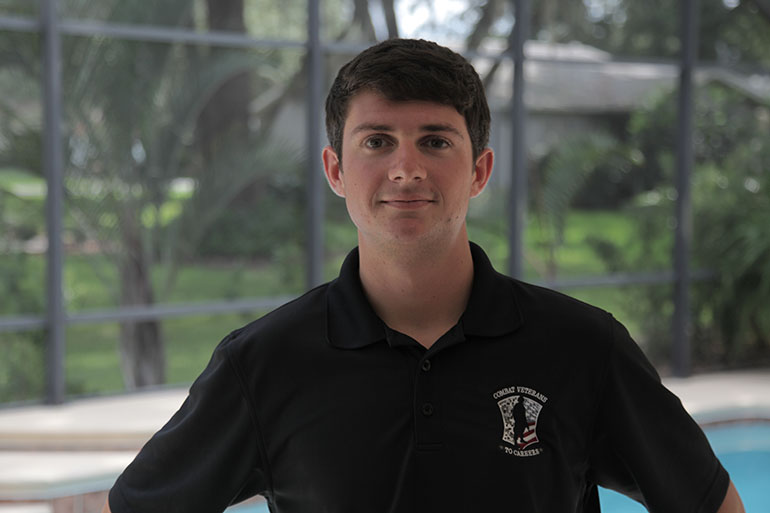 Alex moved up to Jacksonville with his grandparents to try to retreat, but his mother searched for help back home. She got in touch with David Booth, founder and CEO of Combat Veterans to Careers, who insisted Alex get in touch with him.

After some delay, Alex decided to give it a chance. He was still feeling the same frustrations in Jacksonville as he did back home. He spoke with David for two-and-a-half hours, opening up more about his military background than he ever had to anyone. David convinced him to move back to Lady Lake, where CVC could help him find a career path, access his V.A. benefits for a college education, find him affordable housing and most importantly, get him connected with other combat veterans who were going through or had gone through the same transition.

With the help of CVC, it didn’t take long for Alex to find the fulfillment and camaraderie he was missing. He’s currently living on his own, receiving a college education, working as an aircraft mechanic at Leesburg International Airport and has become fully involved in team CrossFit training.

QUOTES:
“I think CVC is the best organization, and the community across the country needs to pick up on it and get involved immediately.” – Alex Nataline

“They’ve helped me in every single aspect of life – mentally, physically and emotionally. David always says they’ll provide a hands-on 360 degree approach, and he’s fulfilled that promise ever since the day I met him.” – Alex Nataline